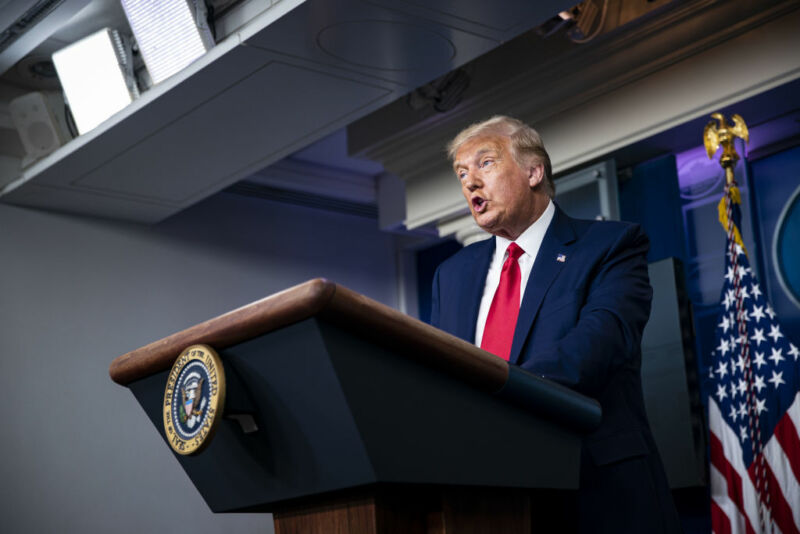 Enlarge / US President
Donald Trump speaks during a news conference in which he frequently
contradicted his own health experts. (credit:
Bloomberg/Getty Images)

There was good news then bad news for public health expertise
yesterday. In the wake of increasingly unhinged behavior from a
Trump-appointed communications director at the US Department of
Health and Human Services, he and one of his key appointees

have left their posts—one for two months, one permanently.
But any hopes that science might resume being the main driver of US
health policy were short-lived. Earlier in the day, CDC head Robert
Redfield and other Health and Human Services officials testified
before a Senate panel. By the evening, the president himself was
calling his own CDC director mistaken about everything from mask
use to the schedule of vaccine availability.

By the end of the day, Redfield was tweeting
statements that balanced ambiguity against seeming to support
Trump’s view.

A backdrop of turmoil

A constant background of tension has existed between the Trump
administration (which wants the country to return to normal
operations despite the medical consequences) and public health
officials (who actually want to protect the public’s health). But
several things have driven those tensions into the open recently,
starting with
last week’s revelation that political appointees were
attempting to interfere with reports from career scientists at the
CDC. That issue was seemingly resolved in the CDC’s favor, as a key
administration figure in the Department of Health and Human
Services (HHS), Michael Caputo, took a two-month medical leave
after making a video in which he spoke of armed uprisings and
conspiratorial cabals of CDC scientists.

Study: building a better super-capacitor out of super-stinky durian fruit