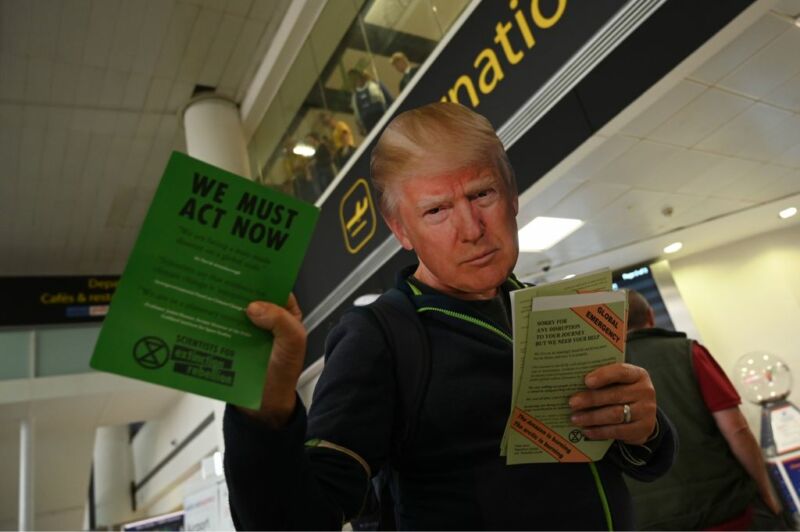 Enlarge / A climate
activist wearing a mask of US President Donald Trump hands out
leaflets at a protest action during the eleventh day of
demonstrations by the climate change action group Extinction
Rebellion, at Gatwick Airport, in Crawley, south of London on
October 17, 2019. Activists from the environmental campaign group
Extinction Rebellion have vowed to challenge a blanket protest ban
imposed by the London police. (Photo by Glyn KIRK / AFP) (Photo by
GLYN KIRK/AFP via Getty Images) (credit: Glyn KirkGetty Images)

Lots of the mainstream press has struggled with a desire to
maintain what they think is objectivity in the face of scientific
evidence. On matters like evolution and climate change, major
outlets have instead tried to present balance between two opposing
sides. But this was so obviously problematic that John Oliver made fun of
it, so we must be doing better now, right?

Maybe not. New research from Brown University’s Rachel Wetts
suggests that major newspapers are still more likely to feature the
views of business interests and still overrepresent people who
don’t seem to accept the reality of climate change.

How do you measure who has the most influence on press coverage?
There’s a whole industry devoted to exercising that influence:
public relations. Among the other things they do, PR people put
together press releases designed to attract attention (as their
name implies) from the press. So, Wetts simply obtained about 1,800
press releases from a mix of organizations: businesses and trade
groups, the government, and public interest groups.

Source: FS – All – Science – News
The science may be settled, but the press coverage
isn’t

Are bioplastics all hype or the future of textiles?

People built bone circles at the edge of ice sheets, and we don’t know why

WHO butchers asymptomatic COVID comments. Here’s what they meant