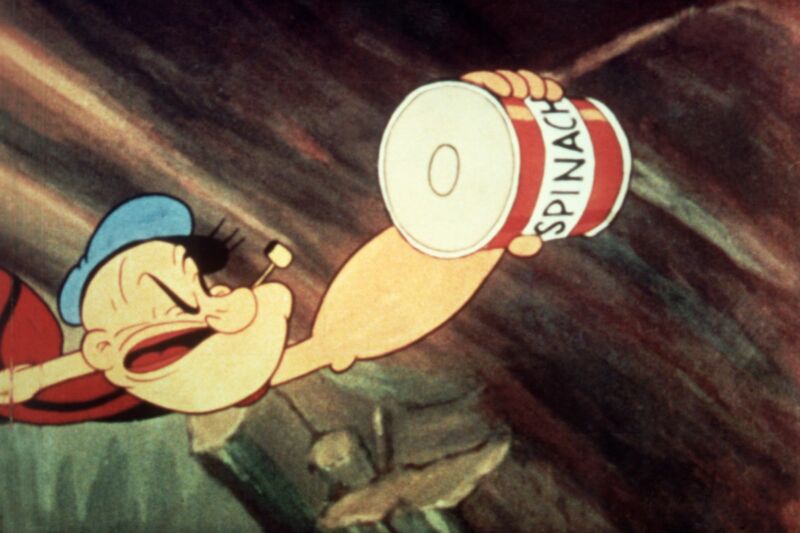 Enlarge / Popeye reaches
for a can of spinach in a still from an unidentified Popeye film,
c. 1945. Scientists at American University believe the leafy green
has the potential to help power future fuel cells. (credit:
Paramount Pictures/Courtesy of Getty Image)

When it comes to making efficient
fuel cells, it’s all about the catalyst. A good catalyst will
result in faster, more efficient chemical reactions and, thus,
increased energy output. Today’s fuel cells typically rely on
platinum-based catalysts. But scientists at American University

believe that spinach—considered a “superfood” because it is
so packed with nutrients—would make an excellent renewable
carbon-rich catalyst, based on their proof-of-principle experiments
described in a recent
paper published in the journal ACS Omega. Popeye would
definitely approve.

The notion of exploiting the photosynthetic properties of
spinach has been around for about 40 years now. Spinach is
plentiful, cheap, easy to grow, and rich in iron and nitrogen. Many
(many!) years ago, as a budding young science writer, I attended a
conference talk by physicist Elias Greenbaum (then with Oak Ridge
National Labs) about his spinach-related
research. Specifically, he was interested in the protein-based
“reaction centers” in spinach leaves that are the basic mechanism
for photosynthesis—the chemical process by which plants convert
carbon dioxide into oxygen and carbohydrates.

There are two types of reaction centers. One type, known as
photosystem 1 (PS1), converts carbon dioxide into sugar; the other,
photosystem 2 (PS2), splits water to produce oxygen. Most of the
scientific interest is in PS1, which acts like a tiny
photosensitive battery, absorbing energy from sunlight and emitting
electrons with nearly 100 percent efficiency. In essence, energy
from sunlight converts water into an oxygen molecule, a positively
charged hydrogen ion, and a free electron. These three molecules
then combine to form a sugar molecule. PS1s are capable of
generating a light-induced flow of electricity in fractions of a
second.

WHO tries to calm talk of pandemic, says the word “does not fit the facts”

The chemistry of cold-brew coffee is so hot right now

Augmented reality could be the geology classroom’s killer app