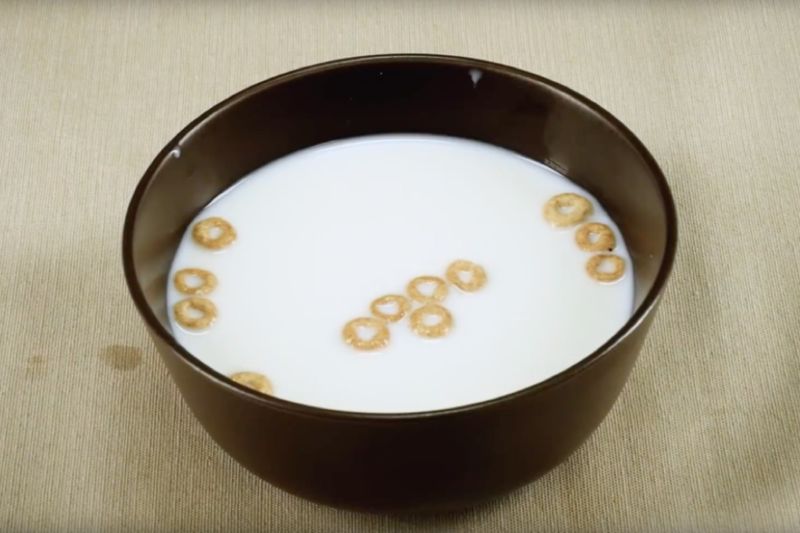 Enlarge / There’s some
pretty cool physics at work when those last few Cheerios clump
together in the bowl. (credit: It’s Okay To Be
Smart/YouTube)

Those who love their Cheerios for breakfast are well acquainted
with how those last few tasty little “O”s tend to clump together in
the bowl: either drifting to the center, or to the outer edges.
It’s been dubbed the “Cheerios
effect,” although I can state with confidence the phenomenon
can also observed in a bowl of Froot Loops. Now a
team of physicists has made the first direct measurements of the
various forces at work in the phenomenon, described in
a new paper in Physical Review Letters.

“There have been a lot of models describing this Cheerios
effect, but it’s all been theoretical,” said
co-author Ian Ho, an undergraduate at Brown University.
“Despite the fact that this is something we see every day and it’s
important for things like self-assembly [for micro robotics], no
one had done any experimental measurements at this scale to
validate these models. That’s what we were able to do here.”

The Cheerios effect is found elsewhere in nature, such as grains
of pollen (or, alternatively, mosquito eggs) floating on top of a
pond, or
small coins floating in a bowl of water. A
2005 paper in the American Journal of Physics outlined the
underlying physics, identifying the culprit as a combination of
buoyancy, surface tension, and the so-called “meniscus
effect.”

Source: FS – All – Science – News
Physicists measured forces behind why Cheerios clump together in your bowl

The real science behind SETI’s hunt for intelligent aliens