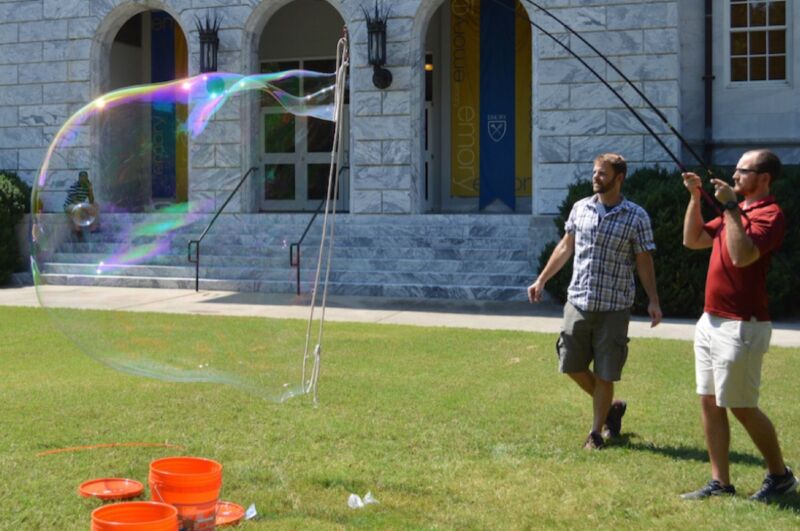 Everybody loves bubbles, regardless of age—the bigger the
better. But to blow really big, world-record-scale bubbles requires
a very precise bubble mixture. Physicists have determined that a
key ingredient is mixing in polymers of varying strand lengths,
according to
a new paper in Physical Review Fluids. That produces a soap
film able to stretch sufficiently thin to make a giant bubble
without breaking.

Bubbles may seem frivolous, but there is some complex underlying
physics, and hence their study
has long been serious science. In the 1800s, Belgian physicist
Joseph
Plateau outlined four basic laws of surface tension that
determine the structure of soapy films. Surface tension is why
bubbles are round; that shape has the least surface area for a
given volume, so it requires the least energy to maintain. Over
time, that shape will start to look more like a soccer ball than a
perfect sphere as gravity pulls the liquid downward
(“coarsening”).

Bubbles and foams remain an active area of research. For
instance, in 2016, French physicists worked out a
theoretical model for the exact mechanism for how soap bubbles form
when jets of air hit a soapy film. They found that bubbles only
formed above a certain speed, which in turn depends on the width of
the jet of air. If the jet is wide, there will be a lower threshold
for forming bubbles, and those bubbles will be larger than ones
produced by narrower jets, which have higher speed thresholds.
That’s what’s happening, physics-wise, when we blow bubbles through
a little plastic wand: the jet forms at our lips and is wider than
the soapy film suspended within the wand.

Starship chilled. Starship pressurized. And for the first time, it didn’t explode