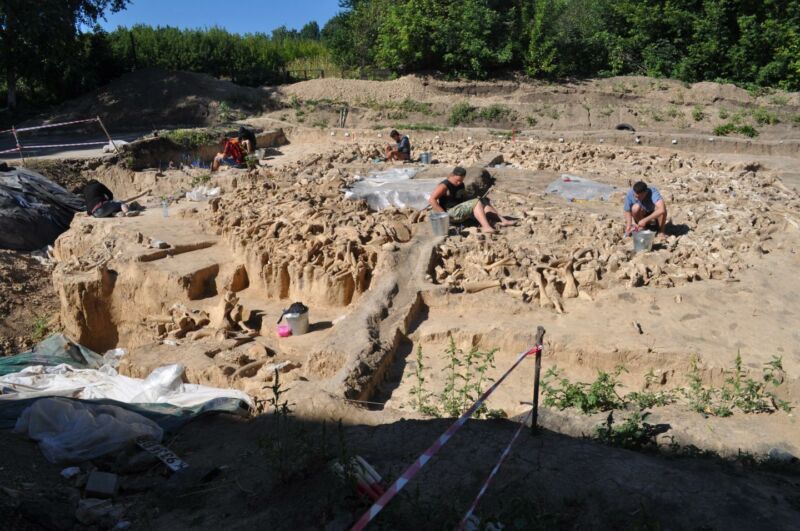 As the last Ice Age tightened its hold on Europe, a group of
people living near the Don River piled dozens of mammoth bones into
a 12.5m (30ft) wide circle. They may have lived in the shelter of
the mammoth bones for a while, huddling around fragrant fires of
conifer wood and mammoth bone and making stone tools. But the
traces they left are so light that it seems they didn’t stay
long—or maybe they only visited occasionally.

Archaeologists found the bone circle in 2015. It’s one of
about 70 mammoth-bone circles scattered around eastern Europe and
western Russia, and it’s one of three within a few hundred square
meters of each other near the modern village of Kostenki, about
500km (310 miles) south of Moscow. Excavations unearthed the first
bone circle at Kostenki during the 1960s. A second structure nearby
now lies buried under construction on private land. The third bone
circle at Kostenki, discovered in 2015, is the largest and the
oldest structure of the sort ever found.

Fragments of charcoal from inside the circle, along with samples
of mammoth bone and ivory, radiocarbon-dated to around 20,000 years
ago, during the coldest stage of the Last Glacial Maximum. Ice
sheets several kilometers thick stretched southward across most of
northern and western Europe. But people somehow made a living on
the cold, inhospitable steppes just southeast of the glaciers. They
also built huge circles out of mammoth bones—archaeologists just
aren’t sure why.

Source: FS – All – Science – News
People built bone circles at the edge of ice sheets, and we don’t know why

Relativity Space has big dreams. Is the company for real?

An Italian-made rocket faces a big test on Thursday night