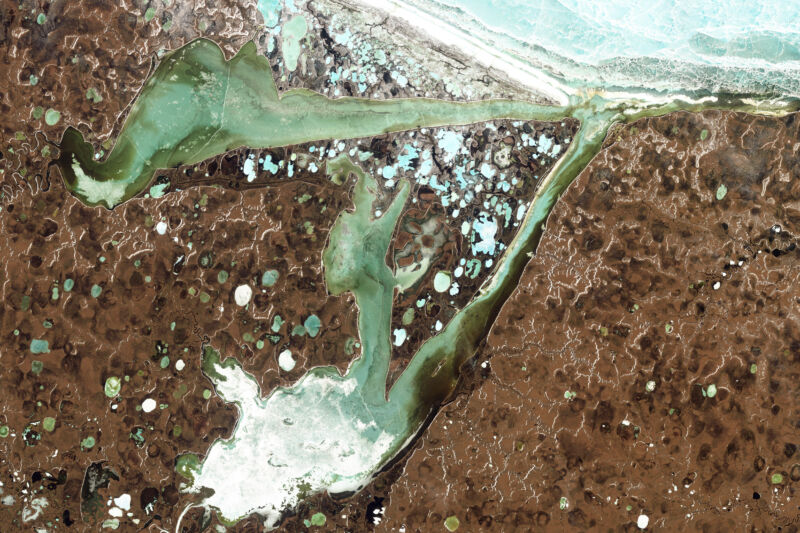 Enlarge / These little
round jewels near the Siberian coast are thermokarst lakes, formed
when pockets of thawing permafrost deflate as the ice disappears.
(credit:
NASA EO)

Arctic permafrost has long had a sort of “here there be
dragons” status when it comes to climate change. The thawing of
permafrost represents a positive feedback that amplifies warming by
releasing more greenhouse gas into the atmosphere. But
characterizing plausible future scenarios in which that release
takes place hasn’t been easy.

Making careful measurements of local permafrost thawing has
enabled scientists to simulate the general behavior and incorporate
that into models. So far, however, those models have been limited
to the gradual change that occurs as warming temperatures allow the
thawing to reach slightly greater depths each successive summer.
But a new study led by Merritt Turetsky at the
University of Colorado, Boulder, simulates something different,
based on a recent data-gathering effort: abrupt-thaw processes.

Abrupt thaw can occur in a few different ways, but generally
relates to pockets of permafrost with a larger percentage of ice
inside. If that ice melts, the soil will deflate and collapse. On
hillsides, soil may slump downslope or create a new drainage gully.
And in low-lying areas, it can create a new wetland or lake as
water fills the depression. Both situations can accelerate thaw and
carbon-release processes greatly.

Source: FS – All – Science – News
New estimate of how much thawing permafrost will worsen warming

The cheapest climate target to hit? Around 2°C