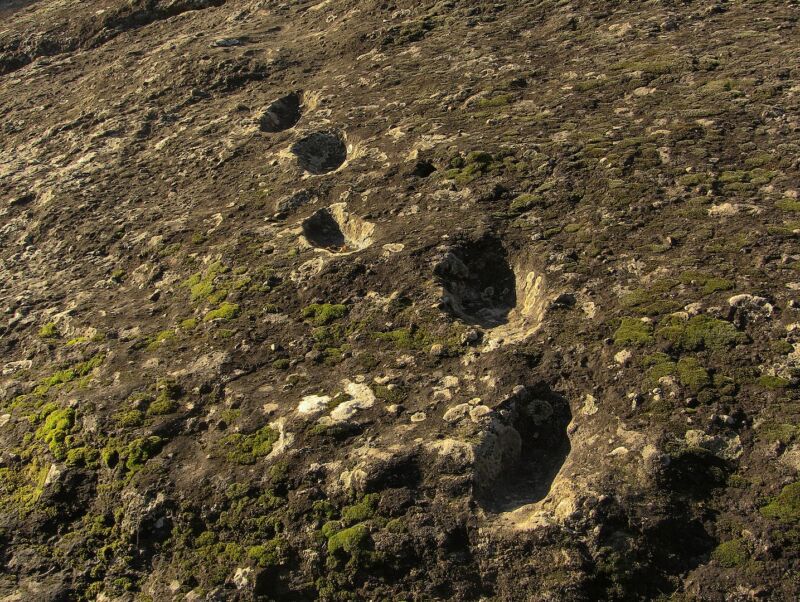 Roccamonfina volcano, about 60km northwest of Vesuvius, erupted
violently around 350,000 years ago. Pyroclastic flows—deadly
torrents of hot gas and volcanic ash—raced down the sides of the
mountain. But within a few days, a small group of hominins trekked
across the layer of ash and pumice that covered the steep
mountainside. Recent analysis and some newly identified prints
suggest that the intrepid (or reckless) hominins may have been Homo
heidelbergensis who lived and hunted near the volcano.

Another layer of ash later covered the slope, sealing away at
least 81 tracks until the early 1800s, when erosion revealed them
to the local humans. The tracks record where at least five
climbers, all with different foot sizes, walked down the steep,
ash-covered hillside. One trail zigzags back and forth downhill,
and you can easily picture climbers carefully working their way
diagonally across the slope. Along another, more curving path,
there are still handprints where the climbers reached out to steady
themselves, and a slide mark reveals where one climber slipped.

The ash must have been cool enough to walk on but still soft
enough to preserve tracks—very detailed ones, in a few cases.
According to ichnologist Adolfo Panarello (of University of Cassino
and Southern Latium) and his colleagues, that must have happened
within a few days of the pyroclastic flow; Roccamonfina may even
still have been erupting. In the 1800s, people living around the
now-extinct volcano were sure that only the devil could have left
those tracks.

WHO tries to calm talk of pandemic, says the word “does not fit the facts”