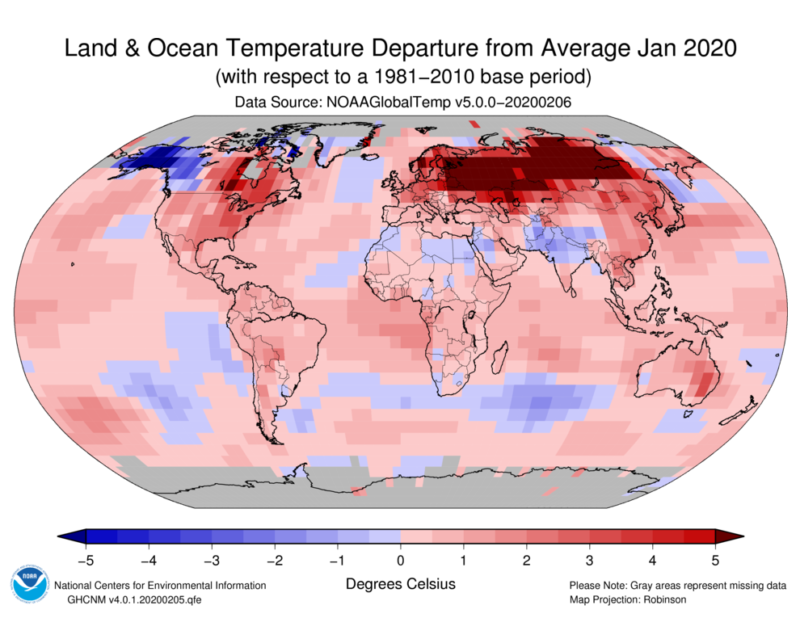 We’re off to a hot start in 2020, with January setting a new
mark as the warmest instance of that month on record for the globe.
And as NOAA pointed out in its monthly summary
released Thursday, that occurred without the warming influence
of an El Niño in the equatorial Pacific Ocean, where conditions
remain neutral.

Few places around the world
had a cool month, with much of India and Alaska/Western Canada
providing exceptions. Europe through to northern Asia was
particularly warm, and January ranked fifth warmest over the
contiguous US. This was largely due to remarkably tight circulation
of the “polar vortex,” which helped keep Arctic air bottled up
north of the mid-latitudes.

For the US, the weather
pattern was dominated by an area of low pressure around Alaska
and high pressure off the coast of California. Alaska and western
Canada stayed colder in this pattern, which also funneled moisture
over the Pacific Northwest while keeping the US Southwest dry. In
the middle of the month, the low pressure shifted east for a bit,
bringing just enough cool air over the central US to produce a fair
bit of precipitation.

Source: FS – All – Science – News
January was warmest on record for the globe