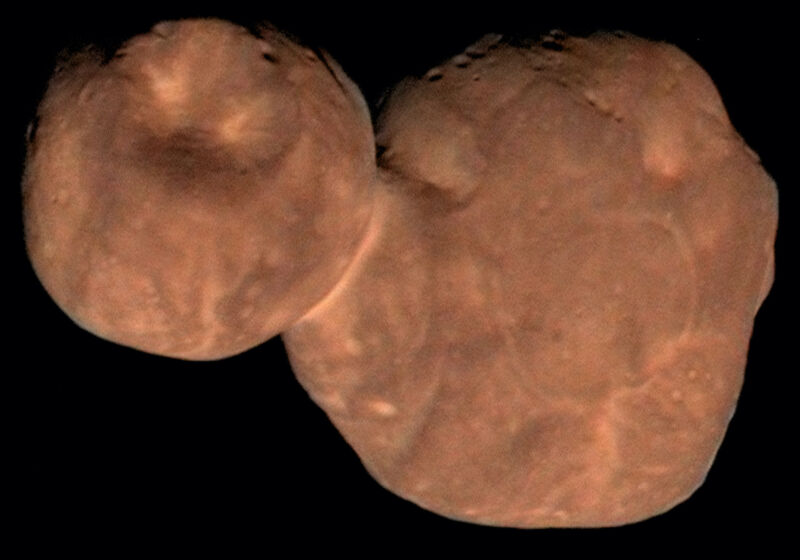 Following its successful rendezvous with Pluto, the New Horizons
spacecraft was sent on towards
a smaller object out in the Kuiper Belt. As it shot past, the
spacecraft captured images of a small world consisting of two very
distinct lobes, with properties that
scientists found a bit confusing. But details would have to
wait, as the combination of distance and power budget meant that
transmitting much of New Horizons’ data back to Earth was a slow
process.

The wait for that data is now over, as the high-resolution
imagery is now available, and scientists have used it to try to
better understand the formation and structure of what is now known
as Arrokoth (named for the Powhatan word for “sky”). While the data
doesn’t answer every question we might have about Arrokoth, it does
give us some very good ideas about how such a strange structure
could have formed.

New Horizons was the fastest probe as launched from Earth
(others have since picked up more speed thanks to gravity assists),
and Arrokoth is very small, meaning the probe had to get rather
close before it could be imaged in any detail. That left a narrow
window for gathering data during the flyby, but the papers released
today details just how narrow it was. As little as two days before
the closest pass, Arrokoth was still showing up as a single pixel
in New Horizons’ cameras. It didn’t grow larger than 10 pixels
until about a half day before. So the vast majority of the data
comes from a window that’s just 12 hours wide.

Geoengineering’s gender problem could put the planet at risk