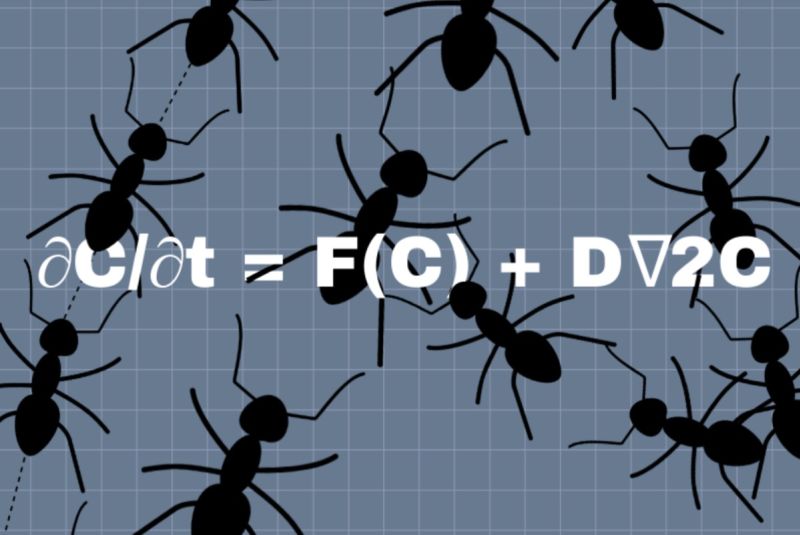 Azteca ants build their nests in shade trees, and it’s
relatively common to find other nests in trees nearby. But these
clusters of ant nests are often separated by large sections of
shade trees where there are no nests at all. A December
overview paper in BioScience by scientists at the University of
Michigan argued that there is now substantial evidence that this
unusual clustering is the result of self-organizing behavior of the
ants—not external factors like temperature or moisture. In fact,
the mechanism at work is strikingly similar to a process described
by the late Alan Turing in a seminal
1952 paper.

Turing was attempting to understand how natural, nonrandom
patterns emerge (like a zebra’s stripes), and he focused on
chemicals known as morphogens. He devised a mechanism involving the
interaction between an activator chemical and an inhibitor chemical
that diffuse throughout a system, much like like gas atoms will do
in an enclosed box. The BioScience paper draws an analogy to
injecting a drop of black ink into a beaker of water. Normally this
would stabilize a system: the water would gradually turn a uniform
gray. But if the inhibitor diffuses at a faster rate than the
activator, the process is destabilized. That mechanism will produce
a so-called  “Turing
pattern:” spots, stripes, or, when applied to an ecological
system, clusters of ant nests.

The authors of the BioScience paper write:
“The basic idea is that the activating chemical starts the reaction
at a specific point in the space but begins its diffusion away from
that point immediately… The repressive chemical is eventually
produced by the reaction and cancels the effect of the activator
but, because it diffuses at a rate that is greater than that of the
activating chemical, it eventually occupies a space where the
activator had not yet arrived, therefore canceling the effect of
the activator at that point.”

Source: FS – All – Science – News
Clustering pattern of Azteca ant colonies may be due to a Turing mechanism

Humans are complicated—do we need behavioral science to get through this?

An early version of Starship takes its first, tentative steps off Earth