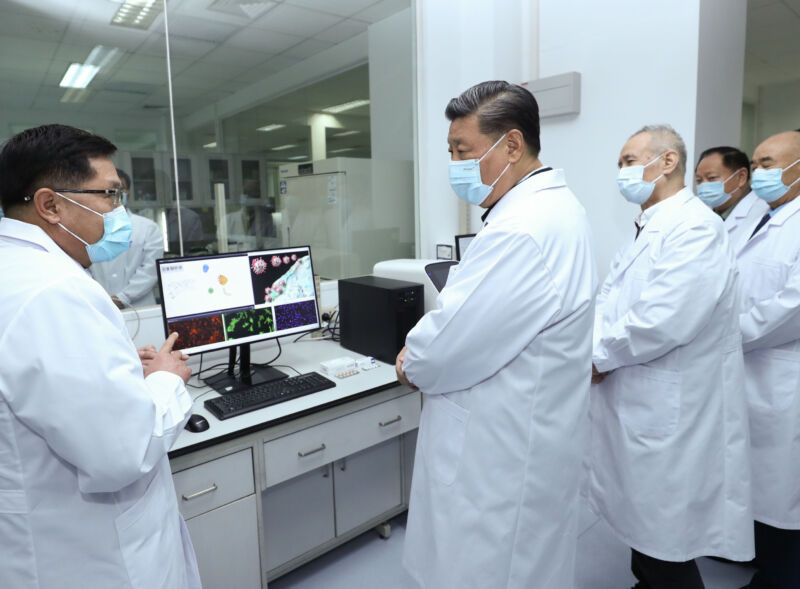 Enlarge / Chinese
President Xi Jinping learns about the progress on a COVID-19
vaccine during his visit to the Academy of Military Medical
Sciences in Beijing on March 2, 2020. (credit:
GettyXinhua News Agency)

China has approved an experimental COVID-19 vaccine for use in
its military after early clinical trial data suggested it was safe
and spurred immune responses—but before larger trials that will
test whether the vaccine can protect against SARS-CoV-2
infections.

This marks the first time any country has approved a candidate
vaccine for military use. China’s Central Military Commission
made the approval June 25, which will last for a year, according to
a filing
reported by Reuters.

The vaccine, developed by biotech company CanSino Biologics and
the Chinese military, is a type of viral vector-based vaccine. That
means researchers started with a viral vector, in this case a
common strain of adenovirus (type-5), which typically causes mild
upper respiratory infections. The researchers crippled the virus so
that it doesn’t replicate in human cells and cause disease. Then,
they engineered the virus to carry a signature feature of
SARS-CoV-2—the coronavirus’s infamous spike protein, which juts
out from the viral particle and allows the virus to get a hold on
human cells.

Source: FS – All – Science – News
China moves forward with COVID-19 vaccine, approving it for
use in military

Coronavirus: Is it too much to ask for an actual plan?

Ancient Mongol warrior women may have inspired legend of Mulan