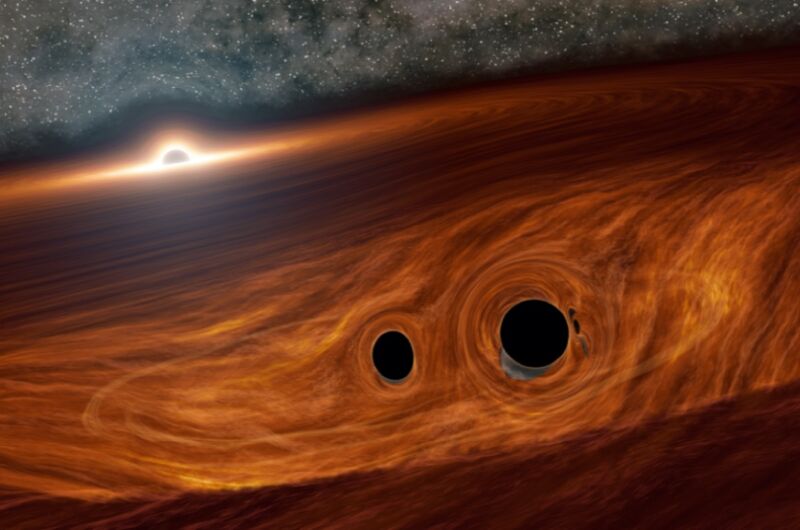 Enlarge / Artist’s concept
of a supermassive black hole and its surrounding accretion disk of
gas. Embedded within this disk are two smaller black holes,
orbiting one another, that eventually collided and may have
produced a detectable burst of light. (credit: Caltech/R. Hurt
(IPAC))

One of the most defining characteristics of a black hole is that
nothing can escape once it passes the event horizon—not even
light. So one would expect the same to be true when two black holes
collide and merge. But some astronomers have posited that there
could be unusual conditions in which such a merger could produce an
accompanying explosion of light. By combining gravitational wave
data with data collected during a robotic sky survey, one team
thinks it has found the first evidence of such a phenomenon,
according to a new paper in Physical Review Letters.

LIGO detects gravitational waves via
laser interferometry, using high-powered lasers to measure tiny
changes in the distance between two objects positioned kilometers
apart. (LIGO has detectors in Hanford, Washington, and in
Livingston, Louisiana. A third detector in Italy, Advanced
VIRGO, came online in 2016.) On September 14, 2015, at 5:51am
EST, both detectors picked up signals within milliseconds of each
other for the very first time—direct evidence for two black holes
spiraling inward toward each other and merging in a massive
collision event that sent powerful shockwaves across spacetime.

The collaboration picked up two more black-hole mergers from
that first run. The second run, from November 30, 2016, to August
25, 2017, produced seven more binary black-hole mergers (including
the four just announced) and a binary
neutron-star merger, supported by a simultaneous gamma-ray burst and signals
in the rest of the electromagnetic spectrum, dubbed a “kilonova.”
It was an unprecedented recording of a major celestial event,
combining light and sound, and officially marked the dawn of
so-called “multi-messenger
astronomy.”

Source: FS – All – Science – News
Astronomers think this black hole collision may have
exploded with light