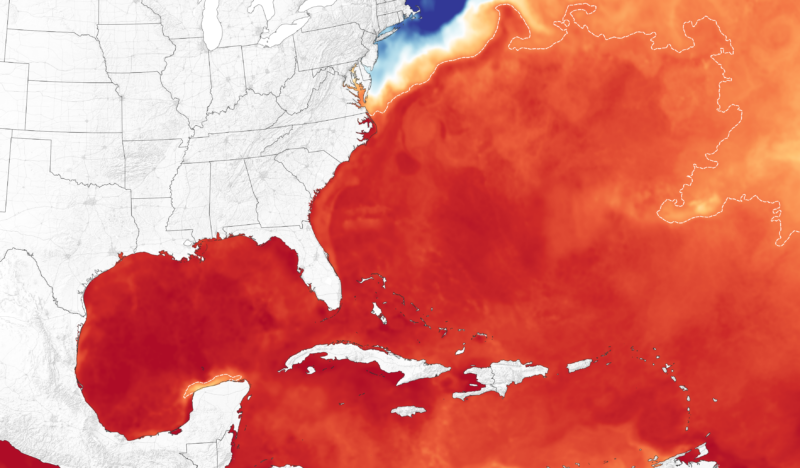 Enlarge / Ocean
temperatures between 20 and 30°C before Hurricane Florence made
landfall in North Carolina. (The dashed white line shows the
threshold of temperatures warm enough to support a hurricane,
around 28°C.) (credit:
NASA EO)

It was the first scientific attempt of its kind—assessing the
impact of climate change on a hurricane before the storm had even
made landfall. And the results (which
we covered at the time) were remarkable, suggesting that 2018’s
Hurricane Florence would be dropping 50 percent more rainfall and
span an extra 80 kilometers (50 miles) because of a warmer
world.

Increased rainfall would hardly be a surprise. Results from many
previous tropical cyclones have found that a warmer atmosphere,
which holds more moisture, is expected to boost storm precipitation
totals. But 50 percent would be exceptional, as previous studies
had fallen somewhere between 6 and 38 percent, depending on the
storm.

The scientists weren’t able to explain why they got that high
number at the time, considering they had only a few days to get the
model forecast simulations run and out the door. With the benefit
of time, the scientists have now published an evaluation of their
groundbreaking effort. Unfortunately, it shows that mistakes were
made.

Source: FS – All – Science – News
A pre-hurricane climate change analysis gets major revision after the storm

Storms wreak havoc on land. We’re only beginning to understand what they do underwater.