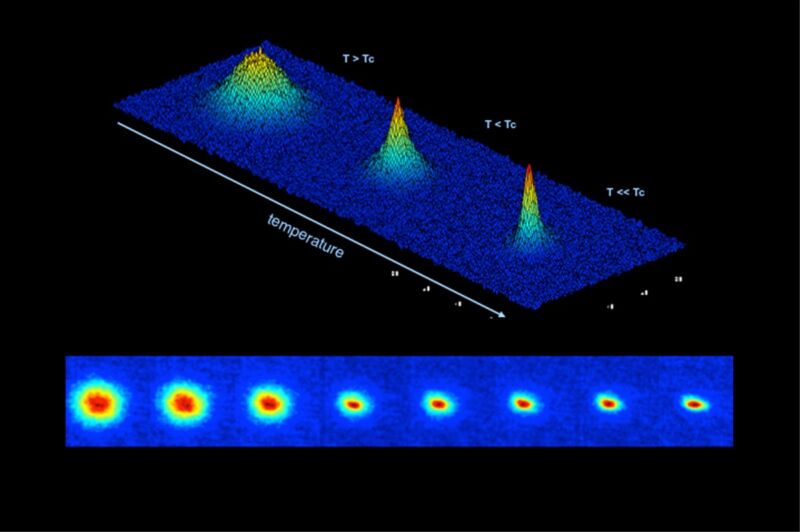 Enlarge / This sequence of
false-color images shows the formation of a Bose-Einstein
condensate in the Cold Atom Laboratory prototype at NASA’s Jet
Propulsion Laboratory as the temperature gets progressively closer
to absolute zero, the temperature at which atoms have almost no
motion. (credit: NASA/JPL-Caltech)

Physicists at Caltech and the Jet Propulsion Laboratory have
created a rare quantum state of matter known as a Bose-Einstein
condensate (BEC) in space for the first time, according to
a
recent paper published in the journal Nature. The physicists
did so by placing a compact experimental setup the size of a
mini-fridge on board the International Space Station (ISS). It’s
called the Cold Atom
Laboratory (CAL), aka “the coolest spot in the universe.”

BECs are named in honor of Albert Einstein and Indian physicist
Satyendra Bose, who predicted the possibility in the 1920s that the
wavelike nature of atoms might allow the atoms to spread out and
overlap if they are packed closely enough together. At normal
temperatures, atoms act like billiard balls, bouncing off one
another. Lowering the temperature reduces their speed. If the
temperature gets low enough (billionths of a degree above absolute
zero) and the atoms are densely packed enough, the different matter
waves will be able to “sense” one another and coordinate themselves
as if they were one big “superatom.”

Physicists Eric Cornell and Carl Wieman, then at the University
of Colorado’s JILA
facility, created the first BECs in the laboratory in 1995.
Using a laser trap, they cooled about 10 million rubidium gas
atoms; the cooled atoms were held in place by a magnetic field. But
the atoms still weren’t cold enough to form a BEC, so they added a
second step, evaporative cooling, in which a web of magnetic fields
conspire to kick out the hottest atoms so that the cooler atoms can
move more closely together. The process works in much the same way
that evaporative cooling occurs with your morning cup of coffee;
the hotter atoms rise to the top of the magnetic trap and “jump
out” as steam.

Source: FS – All – Science – News
A chilling first: Physicists create exotic “fifth form of
matter” on board the ISS